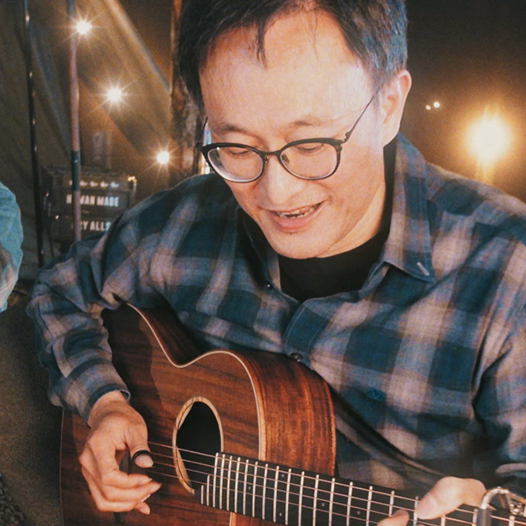 
Dong Yun Chang is a Taiwanese fingerstyle pioneer who's known as The Guitar Poet. He is the founder of Play Ear Music and has years of experience in music production, arrangement and fingerstyle performance.


He started playing acoustic guitar in high school. In university, he started to play classical, pop and taught himself many other styles. He graduated from ChengGong University and studied at the Berklee College of Music where he was the president of the guitar club. Today he promotes acoustic fingerstyle music across all universities in Taiwan.


He has been nominated and won numerous music awards in Taiwan including: Best folk music arrangement, Original music and best guitarist awards. He also won the 14th and 16th Golden Melody best album awards in Taiwan.


In 1996 using one guitar, he released his first Solo album Hear the Flavor of Blue Mountain, released by Sony Music. It became the first Chinese solo steel string fingerstyle album to be released by a major label. In the next few years, Dong continues to innovate on the acoustic music scene and released Thoughts of a City and The Year We Play Guitar. In 2001, he joined Wind Music and released 33 Streets Corner and his Happy Way album.


aNueNue is proud to feature Dong Yun Chang as a featured artist.

Winner of "Best Pop Music Performance Album" at the 10th, 14th and 16th at the Golden Melody