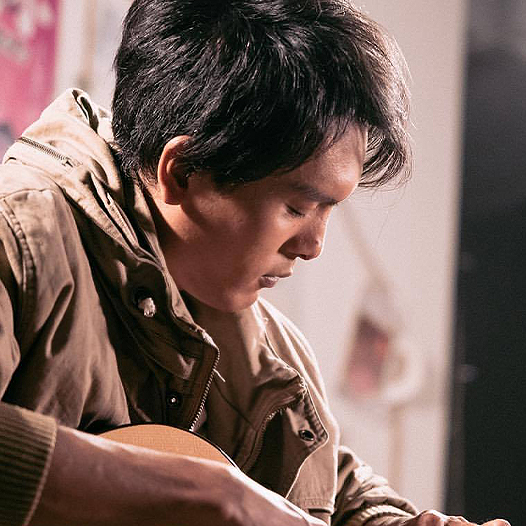 
Baobu expresses himself through music. He's a handsome guy who's easy going and very humble. His strong curiosity of the world has led him to make music outside of the box.


His fingerstyle technique is world-class and can be compared to Western greats like: Leo Kottke and Pat Metheny or YouTube sensations: T-Cophony and Andy McKee. Both Baobu and Andy McKee have a “Drifting Style,” that uses their instrument in a non-traditional way. Their sound is often compared to a guitar, piano and a drum all rolled into one.


When Baobu plays the guitar, it often sounds like two or three people are playing together. His music is warm and full of passion. Sometimes you can feel his loneliness played through his fingertips. He plays across all genres and most of his music is about his past and childhood memories.


The Guitar is more than an instrument to Baobu. His performances are full of surprises as his fingers move like water, flowing across the fingerboard. The lovely fast tempo expresses Baobu's passion and knowledge of the guitar that can be translated across all cultures and epitomizes the spirit of an aNueNue artist.

2010 TV Golden Bell Best Sound Effects Award Finalist "Seeing Heaven" In 2013, the track "Wolf Smoke" in the first album "I Love Taiban" was nominated for the Best Composer Award in the Performance Category of the 24th Golden Melody Awards

2015 Participated in the "104 Taiwan Original Pop Music Awards of the Ministry of Culture, Film, Television and Pop Music Industry Bureau", and won the second in the aboriginal language category

2016 "As long as I grow up" movie theme song "Love, Don't Talk" was nominated for Best Original Movie Song at the 53rd Golden Horse Awards