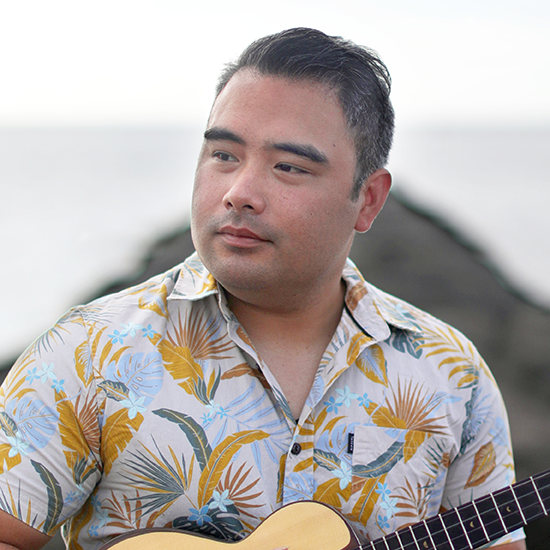 
Kalei's adventure with the ukulele began at the age of thirteen when he suffered a sports injury while playing baseball and needed to find an activity which would keep him busy while he recovered. Following a suggestion made by his parents he decided to try ukulele lessons. After the first strum, Kalei was hooked. His exposure to a wide variety of ukulele masters including Alfred Canopin, Gordon Mark, Byron Yasui, Benny Chong and Kimo Hussey, motivated him to embrace a range of styles - jazz, rock, pop, classical, blues, flamenco, funk, as well as the music of his cultural roots, Hawaiian and island contemporary.


With 3 completed nominated albums to his name Kalei Gamiao been at the forefront of today’s ukulele revolution since 2008 when his debut album, “Contemporary Ukulele,” kicked up the demand for performances in the U.S market. After the release of his second album entitled “Redefined” in 2012 a greater demand for more of his music and performances exposed Kalei to hundreds of thousands of ukulele enthusiasts from around the world as he continues to tour countries such as Thailand, Japan, Taiwan, Philippines, Korea, China, Hong Kong, Malaysia, Singapore and the U.S mainland. When his third album “Merry Ukulele Christmas” released in 2013 as a seasonal project it propelled and broadened Kalei’s repertoire to new levels as many web and social media sites provide instant access for his fans to stay connected to his music and the explosive world-wide popularity of the ukulele. With the release of his 4th latest album “These Moments” in 2016 he has already traveled and performed in different parts of the world to share his passion for music.


As a true ukulele virtuoso he sums it up by saying...... “My ukulele expresses every word and emotion. I love to create and share my musical journeys for everyone to enjoy”.

Winner of "Best Pop Music Performance Album" at the 10th, 14th and 16th at the Golden Melody