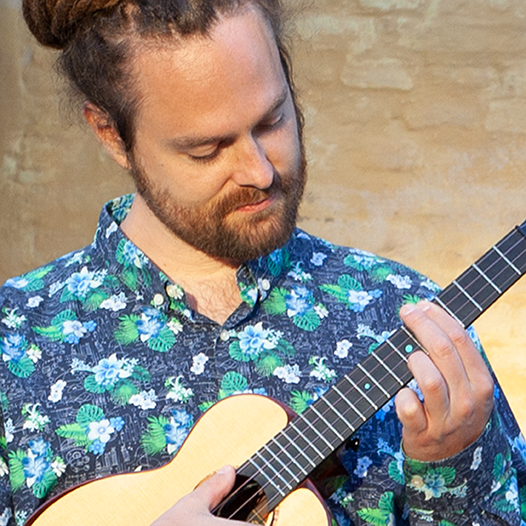 
Danish Tobias Elof has in few years gone from a life as a hopeful young musician to have achieved more than most - gigs from England to Hawaii, won Danish Championship in Folk Music, nominated for a Danish Music Award and admitted to the Academy as the first in world - with the 'ukulele in his hands.

Tobias Elof began to play the 'ukulele when he was 8 years old - at that time because the fingers were not big enough for bass. Although his fingers grew, the desire to play the distinctive instrument, only increased and today it has become his livelihood.

Elof has his musical roots planted in Scandinavian folk music. With virtuosity, intimacy and passion he challenges the genre by experimenting with the music and adjusting it to the 'ukulele.


Tobias Elof has performed at venues and festivals in places such as Sweden, the UK, Estonia and Hawaii and has shared the stage with some of the world's biggest 'ukulele icons - including the Hawaiian legend Kimo Hussey and Canadian James Hill. In addition to the international success, Tobias Elof also frequently visit Danish venues across the country, and is known for his intimate and charming liveperformances.


In 2012 Elof released the debut album "12 Ornli' Syge Tracks for 'Ukulele og Kontrabas" (eng: 12 wicked Tracks for 'Ukulele and double bass) with the bassist Nicolaj Wamberg. This work ensured the duo a Danish Music Award nomination in 2013 and was also the onset of the promising career, which has now been put Denmark on the world map when it comes to 'ukulele music.


In 2014, Elof and aNueNue's owner Johnson were introduced to each other through James Hill. Johnson invited Eloft to the China Ukulele Festival and then to Taiwan for a workshop and a concert. It was great experience to hear Nordic Music in China. Johnson spent almost two weeks with Elof and it was quite a culture shock to learn the differences between European and Asian cultures. Elof has since collaborated with Taiwanese artist Vanessa Ding and plays a Custom Super Lani model fitted with Wood Talk pickup.